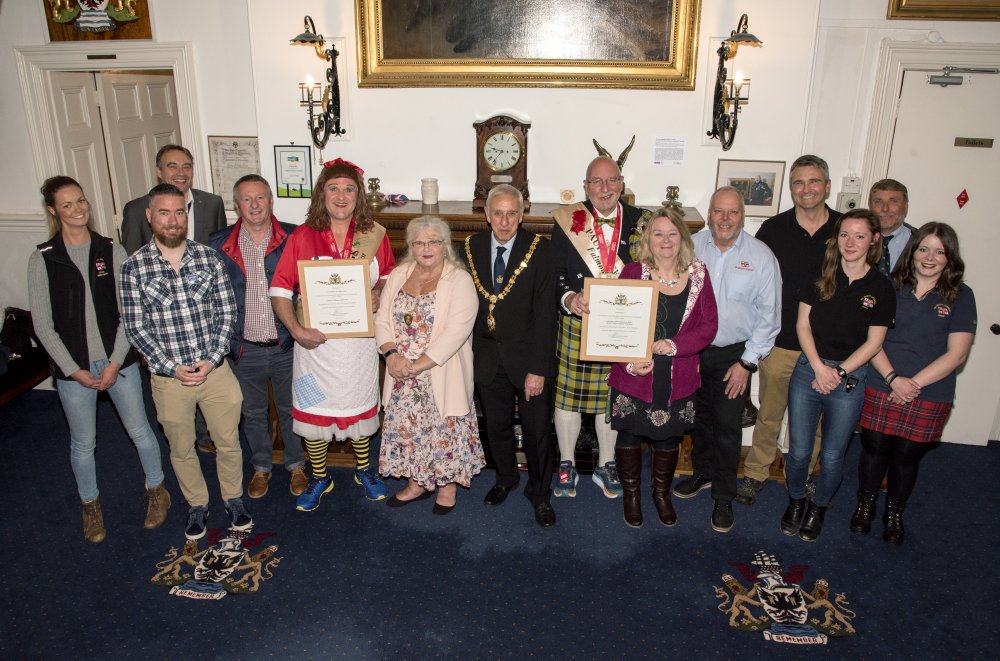 The certificate was presented in recognition of Paul’s dedication and hard work in raising funds for the RNLI and Falmouth Lifeboat Station including his participation in the 2019 London Marathon. Paul, who is 58 and had never run a marathon before, completed the run in 5 hours 56 minutes and 38 seconds and exceeded his original fundraising target of £4,000 by over £2,000. The total now looks like being over £6,500.

Paul ran with his friend Fred Thomas aka Betty Stogs during training and the race itself. Although raising money for Children’s Hospice South West on this occasion, Betty has raised many thousands of pounds for the RNLI in the past and will be doing so again at the forthcoming Falmouth International Sea Shanty Festival in June. Paul and Fred were able to support each other during the marathon to ensure that they both crossed the finish line. Fred was also presented with a framed citation for his fundraising achievements by the Mayor during the reception.

Town Mayor Grenville Chappel congratulated Paul and said: ‘What he has done for the lifeboat is absolutely tremendous, the effort has been amazing.’

In response to the presentation, Paul said: ‘it’s always humbling to be singled out. We’re not doing it for us, we doing it for the cause and this was always about the lifeboat crew and that’s the motivation, that’s what spurred me on. The run was a personal achievement and I actually surprised myself. A lot of people have helped with achieving this, not just the people that donated. These include my wife Pauline and son Dave. It was a team effort and it wouldn’t have been possible without their support.’

‘We have also had support from the Cornish Pirates who are an amazing rugby club. When they heard about my marathon challenge, their first team coach Gavin Cattle produced a short Facebook video wishing me every success to help with the fundraising. They donated two first team shirts signed by the coaching staff and players together with two books on the history of the Cornish Pirates club. These were auctioned with the highest two bidders winning. The proceeds of this were split between the two charities, the RNLI and Children’s Hospice South West.’

A number of Falmouth RNLI volunteers attended the reception and on behalf of Falmouth Lifeboat Station, Deputy Launching Authority Andy Angove congratulated Paul and thanked him for his hard work and fantastic support for the station. The money he has raised will continue to help our volunteer crew members save lives at sea.’