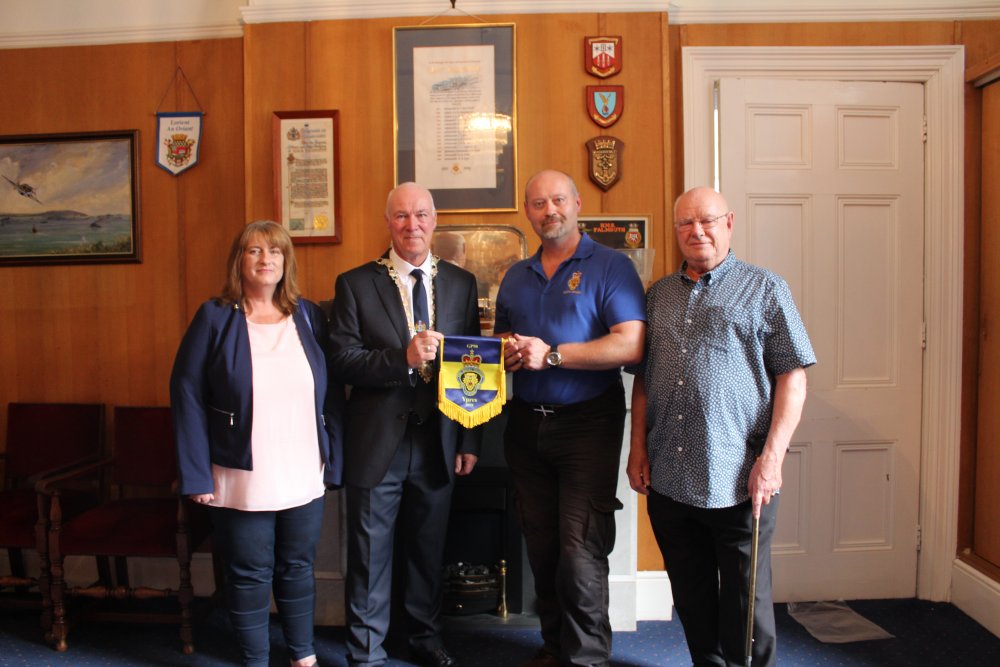 The Penryn British Legion met the Deputy Mayor, Councillor Tony Parker, to present the town of Falmouth with a pennant as a reminder of the Grand Pilgrimage that the Branch attended on behalf of Penryn and Falmouth. The event marked 90 years since the original Great Pilgrimage in 1928, which saw 11,000 World War One veterans and war widows visit the battlefields of the Somme in France and Ypres in Belgium, a decade after the conflict ended. This years event was held in Ypres and was attended by more than 2,000 Legion members and dignitaries, including Civic and military guests from the UK, Commonwealth and Northern Europe. Standard Bearer Matthew Barringer, Branch President Charles Wenmoth and Tony Hendra, Chairman of the Penryn Branch attended the Pilgrimage which culminated in a march through Ypres to the Menin Gate, in remembrance of those who never returned, where over 1,000 wreaths were laid including a wreath by the Charles Wenmoth which carried a message from the Mayor of Falmouth and the Mayor of Penryn. Tony Hendra commented: ‘the Great Pilgrimage 90 is a unique opportunity for the Armed Forces community to come together and bear our standards along the same route in Ypres taken 90 years earlier by the veterans and widows of the First World Way and the Penryn Branch was proud to represent Penryn and Falmouth at this moving event.’ Councillor Parker said:‘It was an honour and a privilege on behalf of Falmouth Town Council and the Community of Falmouth to receive a pennant from the Penryn Branch of the Royal British Legion, which also represents Falmouth, following their attendance, march and wreath laying at the Great Pilgrimage 90, 2018 Remembrance Event’
Posted on Fri, 24/08/2018 - 15:11