New Play Equipment for 'The Bowly' 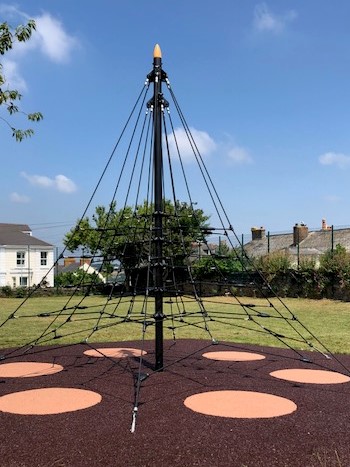 Few people are aware these days that the small public open space known as ‘The Bowly,’ which is located in the heart of Falmouth’s Victorian and Georgian residential area on Trelawney Road has been a public recreational space since the 15th century. Following consultation with the children and young people that use the Bowly, it became clear that what was primarily needed for the well-used tarmac sports area, that could better serve the users, was a second goal and basketball hoop at the other end of the playing area so that games could be played across the whole area. This was installed by Falmouth Town Council as a priority soon after the consultation exercise took place. The other overriding desires were for a play facility for children to climb on and some more adventurous play equipment that would also be suitable for teenagers. Following the grant of planning permission, the town’s grounds maintenance team removed the old wooden multi-use play equipment that had reached the end of its safe and useful lifespan and carried out the preparation works for the new pieces to be installed in the early spring of this year. Funds were applied for and successfully granted from the pot of money into which developers pay a contribution towards infrastructure for the town to purchase 2 new items of equipment and to everybody’s delight last Thursday Falmouth Town Council unveiled a new rope pyramid climber and a quite small innocent looking piece of play equipment called a Rodeoboard. Simon Penna, Grounds and Facilities Manager at Falmouth Town Council said ‘I have to admit that having researched the Rodeoboard I was itching to give it a go and it is great fun, even to a not so sprightly 57 year old….you really must give it a go!’
Posted on Tue, 10/07/2018 - 15:56