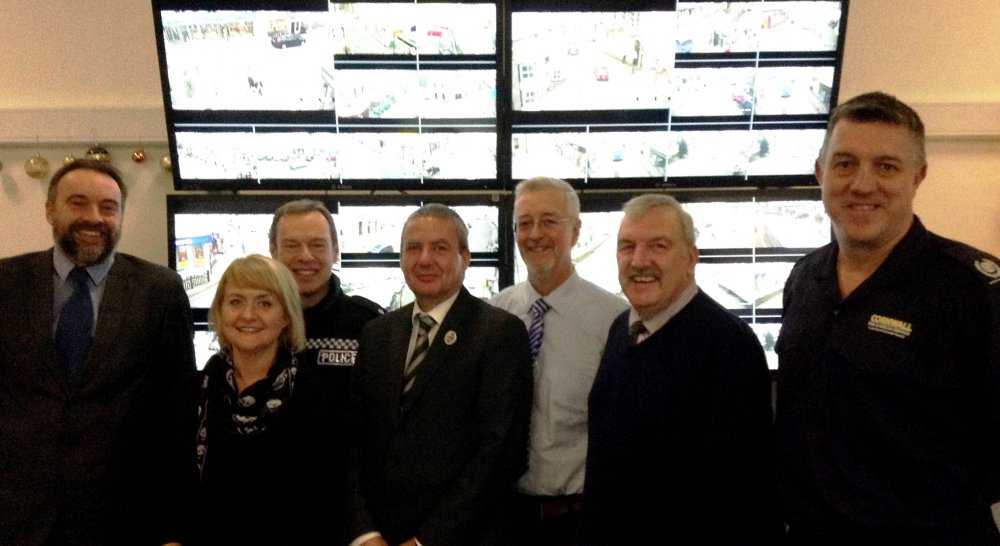 A ground breaking project which involves eight West Cornwall town councils working closely with Cornwall Fire, Rescue and Community Safety Service and Devon and Cornwall Police to use CCTV to reduce crime and anti social behaviour and protect vulnerable people in their local communities was officially launched on Monday, 19 December.

The Town Council CCTV project is the brainchild of Hayle Town Council, who, after installing cameras in their own town, approached other local councils to see if they were interested in joining the project. As a result eight towns - Camborne, Hayle, Helston, Penzance, Redruth, Truro, Penryn and Falmouth - are now taking part in the project with a total of 80 cameras in operation within these locations.

Funded entirely by the Town Councils via council tax, the aim of this innovative project, believed to be the first of its kind in the country, is to provide a safer environment for residents, local businesses and visitors in the eight towns by deterring anti-social behaviour and preventing crime.

Under a contract awarded to Cornwall Fire, Rescue and Community Safety Service (CFRCS), the footage from all 80 cameras is being recorded and monitored by dedicated and specially trained staff based in the service’s Critical Control Centre in Tolvaddon. The 360 degree state of the art cameras provide high quality digital images which can be used to support police prosecutions. A link is also being provided to the Emergency Management Centre at County Hall in Truro so the images can be accessed in emergency situations such as flooding and major fires.

As staff from the Critical Control Centre have direct links to the police and ambulance services, this means they can also summon immediate help for anyone they see who has been taken ill or injured in an emergency.

A special stakeholders group has been set up to oversee and manage the project and ensure that the workload is shared among the eight councils and their partners. The group, which comprises both Members and Clerks from the Town Councils, together with representatives from the Fire and Rescue service and Devon and Cornwall Police, will be chaired by a Member from a different council each year.

This year’s Chair has been Rowenna Brock, from Falmouth Town Council. “We know that residents in these towns recognised that CCTV was an effective tool in tackling crime and anti social behaviour and wanted it to continue to be used” she said. “Many people have told us that the use of CCTV makes them feel safer in their communities.

“I am delighted we have been able to achieve this by working with the police and the fire and rescue service and I am looking forward to building on the strong partnership which has been developed.

“I would like to pay tribute to everyone who has been involved in this ground breaking project which has been nationally praised as ‘a really good model for devolution’ and demonstrates how we are 'Working Together to make Cornwall Safer”.

Cornwall Fire, Rescue and Community Safety Service’s Area Manager Kevin Thomas said "We are delighted to be working in conjunction with the Town Councils and consider the partnership to be an excellent example of localism and devolution. We are very happy to be contributing to the creation and maintenance of safer communities".

Superintendent Sara Crane, Devon and Cornwall Police Commander for West Cornwall, added that the positive action of the Town Councils in working with Community Resilience and the fire and rescue service to develop the use of CCTV in their local communities was helping to support the police in dealing more quickly with incidents of anti social behaviour.

“We have already seen positive results from the cameras which have already been installed in a number of towns” she said.

The success of the project was also recognised by the Police and Crime Commissioner Alison Hernandez on her recent visit to Cornwall.