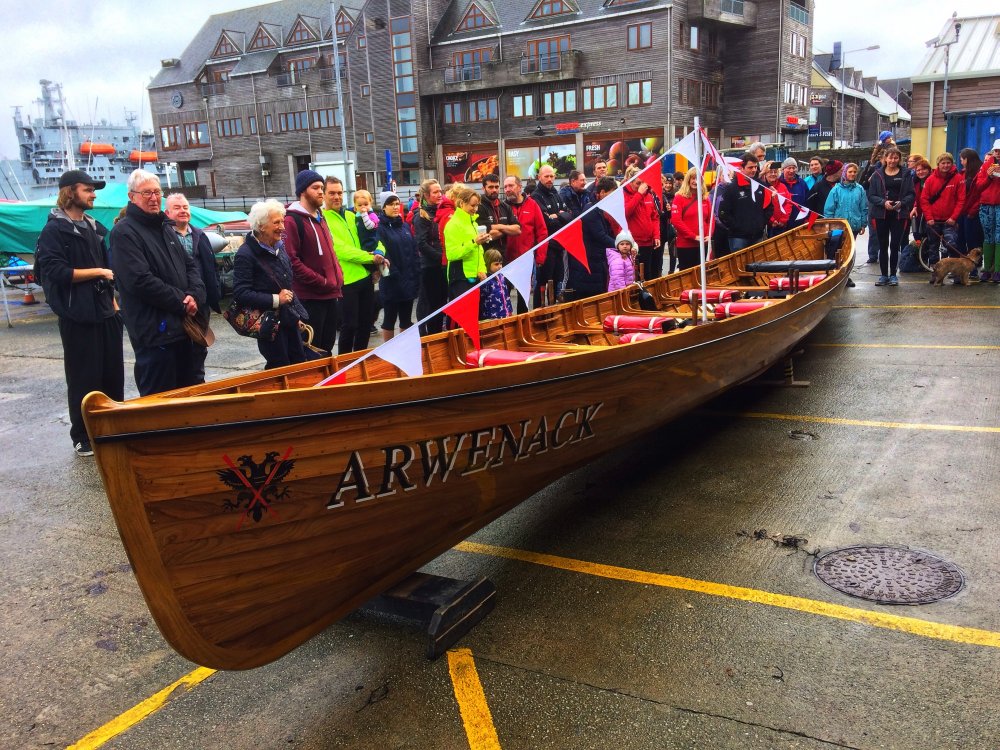 Club members past & present plus supporters gathered at the water’s edge to see the brand new Cornish Pilot Gig built by Peter Williams and blessed by Revd. Jon Robertshaw from The Mission to Seafarers which was launched officially for her first outing on the water.

Deputy Mayor Councillor Tony Parker stated it was a pleasure for me to attend, be part of the occasion and represent Falmouth Town Council and the Community.

Taking 5 months to build by traditional clinker boat builders Peter Williams, all Cornish pilot gigs built today follow the lines of the gig ‘Treffry’, a 32 foot long pilot gig built in 1838. The Cornish Pilot Gig Association (CPGA), who oversees and maintains this one class design send out inspectors at various points to make sure each gig is built to the same measurements. This will be officially recognised as CPGA gig number ‘204’ in the current modern fleet, with each gig now receiving their unique ID.

This will be Falmouth’s 8th built Cornish Pilot Gig since their inception, with the club updating their fleet by selling previous versions to allow for faster, more a competitive racing gig. The current fleet will now be brought back up to four wooden gigs, and two GRP training gigs.

The name ‘Arwenack’ has much history within Falmouth with the infamous Arwenack House. Arwenack House is the oldest building in Falmouth, originally built in 1385 and then largely rebuilt around 1567-1571 by Sir John Killigrew, the first Governor of Pendennis Castle. At that time it was described as ‘the finest and most costly house in the country’. Arwenack will be official named by Falmouth Club President David Barnicoat.

The club will hope to see great success at the upcoming World Pilot Gig Championships 2019 held on the Isles of Scilly, with the Ladies’ and Men’s finishing 2nd and 3rd respectively plus the Men’s SuperVets being crowned World Champions in 2018, to push to bring both Open and SuperVet titles back to Falmouth.