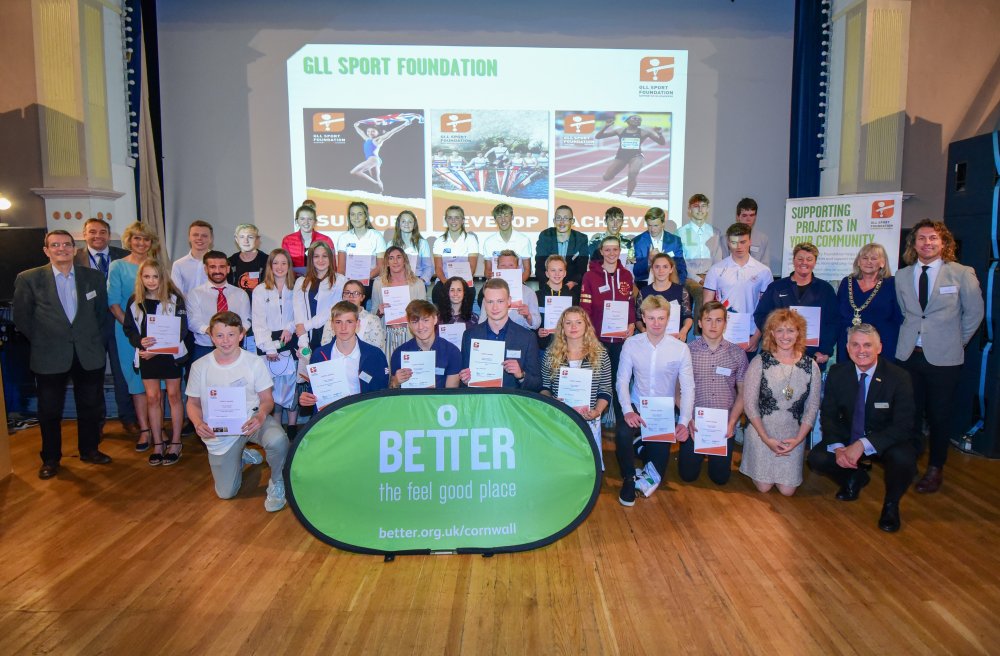 Rising sports stars from across Cornwall gathered together in Falmouth’s Princess Pavilion this week to be presented with funding and logistical support provided by the GLL Sport Foundation (GSF).

Among them were windsurfer Finn Hawkins, 16, from St Austell, who won a bronze medal at the 2018 Youth Olympic Games in Buenos Aires; Dylan Tynan, 15, from Flushing, who represents Great Britain in British Para Table Tennis; netball player Rosie Bartlett, 16, from Truro, who has been selected for England; Abigail Birch, 16, from Penzance, who, as a para athlete, is ranked number 1 in the UK for shotput, discus and javelin and modern pentathlete and Charlotte Hicks, 16, from Pensilva, near Liskeard, who currently holds one world and five national titles.

Fay Dutfield-Horton, 44, from St Erth, was one of those who received an achievement award. In just under two years, she has taught herself to play wheelchair tennis so successfully that she is now ranked number 8 in the UK.

“I started competing two weeks before my 43rd birthday,” said Fay, who sustained a serious knee injury whilst serving in the Army with the Royal Artillery. “I’m now playing on the international circuit and would love to get into the national top five of players. My ultimate goal is to compete in the Invictus Games.

“I used to play tennis but had to learn the wheelchair game off You Tube as there was no coach in Cornwall. This award will help me get the lessons I need.”

In 2019, GSF awards in Cornwall have totalled £79,275 in overall value. £21,675 of that has been given out in cash and another £57,600 provided in benefits like free nationwide gym membership and access to sports rehabilitation. Around 85% of those receiving support get no other funding and 61% of them are aged under 21.

“It costs between £8,000 to £14,000 per year to keep a top-level athlete competing and everyone getting a GSF award in Cornwall is in the top 8 of their sport nationally,” said Chair of the GSF Foundation, Peter Bundey, who compered the evening. “We never ask how the money is going to be spent because we understand the costs involved and know how important it is for each athlete and their families to make those decisions for themselves.

“Every single person here is an inspiration – not just the sporting stars but the parents and friends who support them. I believe they are unsung heroes and, as such, deserve to be acknowledged and applauded too.”

Paralympians Melissa Reid, a visually impaired triathlete from Truro who won bronze at Rio in 2016, and David Wetherill, from Torpoint, who has represented Great Britain in table tennis at the last three Paralympic Games, are GSF Ambassadors.

“I was injured last year and couldn’t compete in triathlons, so I got back into surfing instead and entered the world championships in California,” said Melissa. “Last year’s award paid for that and I ended up winning gold.”

GSF has been helping the UK’s sporting stars make the most of their talent since 2008. Many have gone on to Olympic or Paralympic glory and, at the last Olympics, 14 of them won 20 medals between them.

Felicity Marriott, 37, from Bodmin, is one of those whose drive, passion and talent know no bounds. On 4 May 2008, she broke her neck whilst playing tag on a beach in North Cornwall. A wheelchair user, she has spent the last four years competing with the Riding for the Disabled Association and, with her own horse, is now training for para dressage.

“There are so many inspirational stories and we’ve all got our dreams,” said para table tennis supremo Dave Wetherill. “I’m very proud to be in such distinguished company.”

GLL is a not-for-profit social enterprise that, on 1 April 2017, won a 25-year contract to manage Cornwall’s leisure centre on behalf of Cornwall Council.